Most of the meadowlife has migrated to our official website http://www.friendsofhaileypark.org.uk
at 20:47

Today we've been spying painted lady butterflies, a beautiful migrant - its amazing that they migrate to and from northern Africa every year and are back here for the summer. In the autumn they will all ether die or emigrate to Africa. It seems we're also being asked to note down every time we see them and where and records are showing its been the biggest migration for years.

While down the river at the edge of the meadow we also spied a male orange tip - a butterfly that always seems to be on the move. But at least we managed to get a better glimpse of the speckled wood butterfly.

Over near the railway line we managed to find a grass snake and a family of slow worms basking in the heat.
at 07:48

Nature in the raw 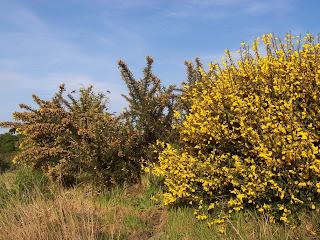 Of late it seems there are lots of jackdaws/carrion crows in the meadow mostly as the sparrowhawk appears to be doing a lot of hunting there and no doubt rich pickings are to be found as a result. Sadly though while I know nature is cruel I disturbed a flock of these corvids on saturday some hopping around the meadow while one or two were pecking a solitary dove to death - on my arrival they left her struggling with a broken wing and a damaged eye - the only solution really was to take her to be put to sleep as while she proved to be still a feisty girl it was the kindest thing to do.

I have seen magpies stealing and killing fledglings from nests before but never this and no doubt it probably happens quite a lot but goes unseen.

At least the broom is now heavy with 'blossom' making a lovely array at one end of the meadow while the gorse that was blooming all winter is now diminishing. I've also noticed more trees appearing on the meadow where no doubt we had scrub before - most of them seem to be oaks that have suddenly appeared to double in size. Sadly I also noticed the first appearance of knotweed in the area we cut and rake each each year.
at 13:37

At last more colour is appearing in and around the meadow - the grass even appears to be greener if that's possible. It seems like there is more broom and gorse on the pile of rocks becuase of or in spite of our massive scrub clearance in the autumn of the willow and buddlea thatusually take over this area - home to small mammals and hunting ground for foxes and reptiles - and its blossoming with its bright yellow flowers. Sadly the nearby pond is drying up - a side effect of the good weather we've been having which no dubt will have a knock-on effect of fewer amphibians so lets hope they found other watery spots to hide in as well. At the edges of the meadow I've spied clumps of cuckoo flowers.
Its lovely to see how the young trees we planted over a year ago are getting on, some are even twice their size now. Unfortunately, there's a clump of knotweed slowly invading one patch.
One dog walker recently was lucky to spy a heron who had been fishing in the Taff and had been quite successful; however, shortly after he'd landed near the changing rooms the sight of dog and walker scared him enough to drop the fish and fly off. Acting quickly as the fish was still alive, a lucky perch, the dogwalker scooped him up and quickly ran towards the river to save him to swim about the Taff for at least another day.
at 19:10

It appears we've made it to the Cardiff Biodiversity Bulletin, Issue 19 - January 2009 with regard to our work in regenerating the meadow.

"Grant funding was secured in June 2008 under the Countryside Partnership programme 08/09 for grassland restoration in Hailey Park. The funding contribution was used for the hire of Cardiff Conservation Volunteers to carry out the removal of scrub in Hailey Park over two dates. The grassland restoration project was a joint project with the Friends of Hailey Park and Community Park Rangers. The work dates took place on Sunday 16 November and Sunday 7 December 2008 and were very successful. The Friends of Hailey Park will endeavour to maintain the grassland in favourable condition via volunteer work days with assistance from Community Park Rangers."

This support just highlights how important this project is.
at 09:19

A pile of rubbish? 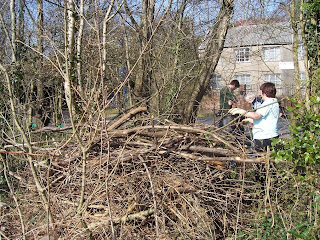 No its a des res fit for insects and hedgehogs. Today, Mothering Sunday, was also a voluntary work day for Friends of Hailey Park.
We've been tidying up the entrance that leads on to the meadow - apart from the bottles and cans that people have thrown in from the road there was lots of dead wood around.
So the rubbish has been picked up and the dead wood has been turned into a couple of habitat piles. Eventually the area will also be planted with bulbs to add a splash of colour, but that will have to wait till next year.
at 16:07

Yes we have reptiles in and around the meadow - no doubt taking advantage of better habitats in some areas. However, as with most things on the meadow its up to us to find out who's living where. Cardiff Council's ecology team have come up with a lovely idea of training local people or those who also spend time on Hailey Park to learn how to survey them - the training session is on Sunday 29 March from 10am (meet-up place to be confirmed). We have a few places left if anyone wants to go on the training and help us in our mission to survey the reptile population here. Any takes please contact fohp@hotmail.co.uk
at 08:49

Why not join Friends of Hailey Park

We have a Constitution and active committee with meetings on the 2nd Wednesday of every month usually at the Royal Exchange pub, Ty Mawr Road which you’re quite welcome to come along to. We are also working hard to improve all aspects of Hailey Park in conjunction with Cardiff Council, police, schools and local representatives. Regular events include volunteer work days (at least once a month) and family fun bowls, along with one-off events throughout the year, e.g safer cycling, walk off Christmas, bat walk, fun challenge bowls match with another group, guided history and nature walks. You can do as little or as much as you like, its your choice. Membership for Friends of Hailey Park 2011 is only £3 per individual/family. You can download a membership form HERE. Email: mail@friendsofhaileypark.org.uk

Scroll down this right-hand column ...

... and find out all the bits and pieces that don’t quite fit into a missive about regenerating our meadow; some of which you may find interesting and others you just might need!

Links to species found in and just around the meadow

Other places to go